One trend in the aquarium hobby that is growing popularity right now is the biotope aquarium. This involves recreating a natural aquatic habitat in the fish tank. Compared to aquascaping biotope aquariums tend to focus more on realism instead of aesthetics. This may involve using the actual rocks, wood and aquarium plants that are found on a specific ecosystem.

Some even go as far as only using the live aquatic plants, rocks and wood that are native to the area of the ecosystem they are trying to recreate. This would mean that creating an African river ecosystem would only involve the use of Anubias, Bolbitis and aquarium plants that are only found in the water systems of Africa. It is the same with the fauna. Congo Tetras are commonly used for these set ups. Using Java fern or having Barbs in that same ecosystem would be a big "NO"; since these freshwater fish come from Southeast Asia. Understanding the environment, one is trying to recreate is therefore crucial.

One type of Biotope is the Blackwater Aquarium. Known for its Black or Tea colored water, this type of planted aquarium has increased in popularity during the past few years. This set up imitates the soft, acidic, tannin filled waters found usually in South America, more specifically the Amazon. This Biotope takes advantage of the tannins leached out by aquarium wood and dead leaves to create this tea-colored dark water. 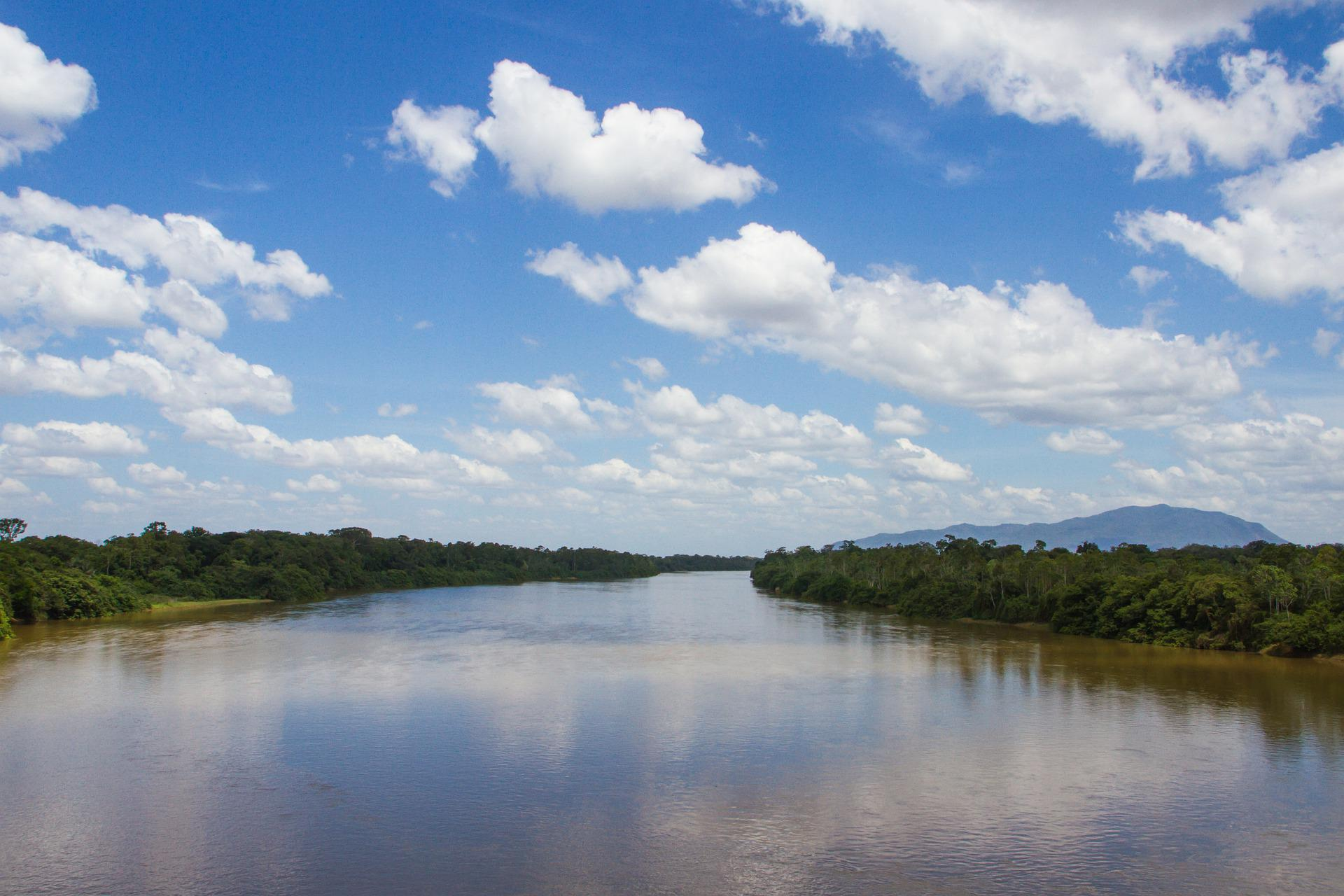 The Benefits of Tannins

For people who have experienced keeping or breeding Betas, the use of tannins may no longer be a new idea. Dried/dead Indian Almond leaves have been used for years to keep Betas healthy. The leaves leach out tannins which would turn the water slightly acidic and brownish. It has been observed in the past that Bettas kept in water with tannins of this leaf have been much healthier and display more vibrant finnage. It not only works on Bettas as it appears but on many popular aquarium fish too. It has been found out that tannins from this leaf and some others do have anti-bacterial and anti-fungal properties. It is very beneficial to fauna who relish soft, acidic water. Tannins from certain woods do act the same. Species of fish like Gouramis, Tetras and some catfish species in the blackwater habitats love this type of water. Neon Tetras and other small schooling fish do in fact spawn in tannin filled blackwater conditions. Having Blackwater biotope would also reduce algae growth in the freshwater aquarium. The acidity and the lack of light able to penetrate would not be a good environment for aquarium plants including algae to thrive in.

The Blackwater environment is a dark environment as it is often beneath big trees with their roots sticking out into the water. The floor seems to be littered with not only dead leaves but fallen branches and dead wood as well. As a result, with the shade from the trees above and the dark brown tannin filled waters little light is able to penetrate. Sunlight if it can penetrate at all would come in streaks as it has to pass through the foliage of the trees above.

Trying to recreate this in the home aquarium would mean using more wood as hardscape. In fact, most blackwater tanks are dominated by it. Oftentimes big roots and tree trunks are preferred as these would be perfect in mimicking that environment. 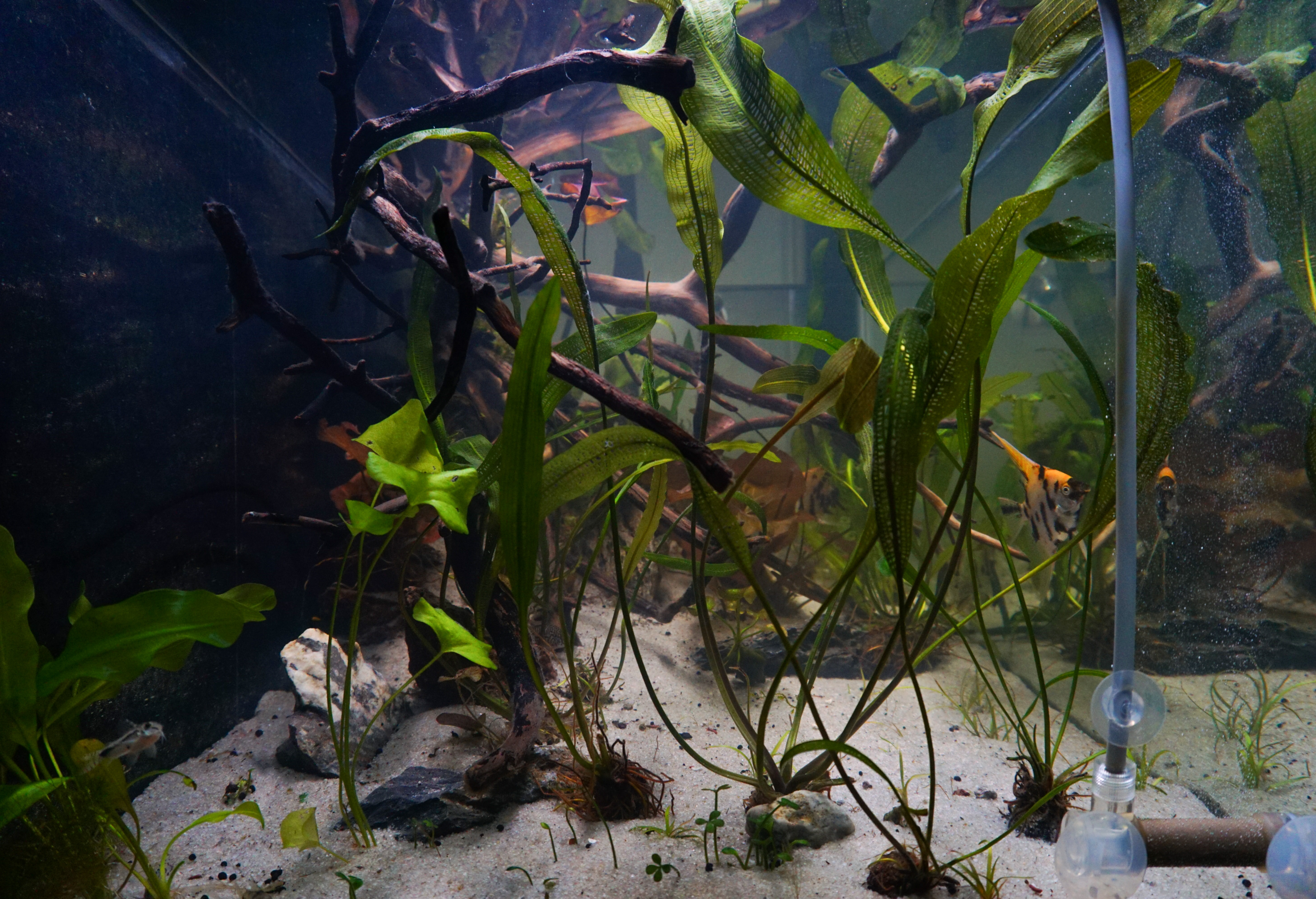 Preparing wood to be used in the aquarium is a long and tedious process. Oftentimes though shops will offer wood that have been prepared and are ready for use in the tank. If the wood is collected in the wild make sure the wood is cleaned before putting in the tank. Some prefer to boil wood for hours before putting it in the fish tank. This is done to get rid of unwanted bacteria, fungus and parasites that may be cause of problems in the set up later on.

Sand as substrate is often preferred. The Blackwater environment does not allow for a lot of aquatic plants to grow so there is no need for aquasoil. White sand or brownish frshwarer sand often is used. Marine sand from the beach cannot be used. These often contain contaminants and salts which would make the water hard. The aim is to create a softwater, acidic environment. Make sure the sand to be used is washed thoroughly. Rinsing aquarium sand more than ten times would not be uncommon as the sand needs to be rid of impurities and contaminants.

To mimic the natural environment, dead leaves would often be used to litter the substrate. Indian Almond Leaves are now available in shops or online so it is not that hard to comeby. Leaves from other trees may release toxins in the water so it would not be advisable to just use any dried leaf without knowing the type of leaf. Unlike driftwood, leaves should not be boiled. Boiling would strip them of the essential tannins. Just make sure they are clean before they are introduced into the tank.

Fish species as neon and Cardinal Tetras would be perfect for this type of Biotope. They actually come from the blackwater habitat, so we can call them blackwater fish. Other small Tetras would do just as fine. Some shrimps seem to enjoy eating leaf litter scattered over the aquarium floor. Fauna need not be restricted to those that are only found in the Amazon. Betta Splendens as well as other species of Bettas and some other species of Anabantids like the Chocolate Gourami enjoy this type of water and may be concerned as acid loving freshwater fish. 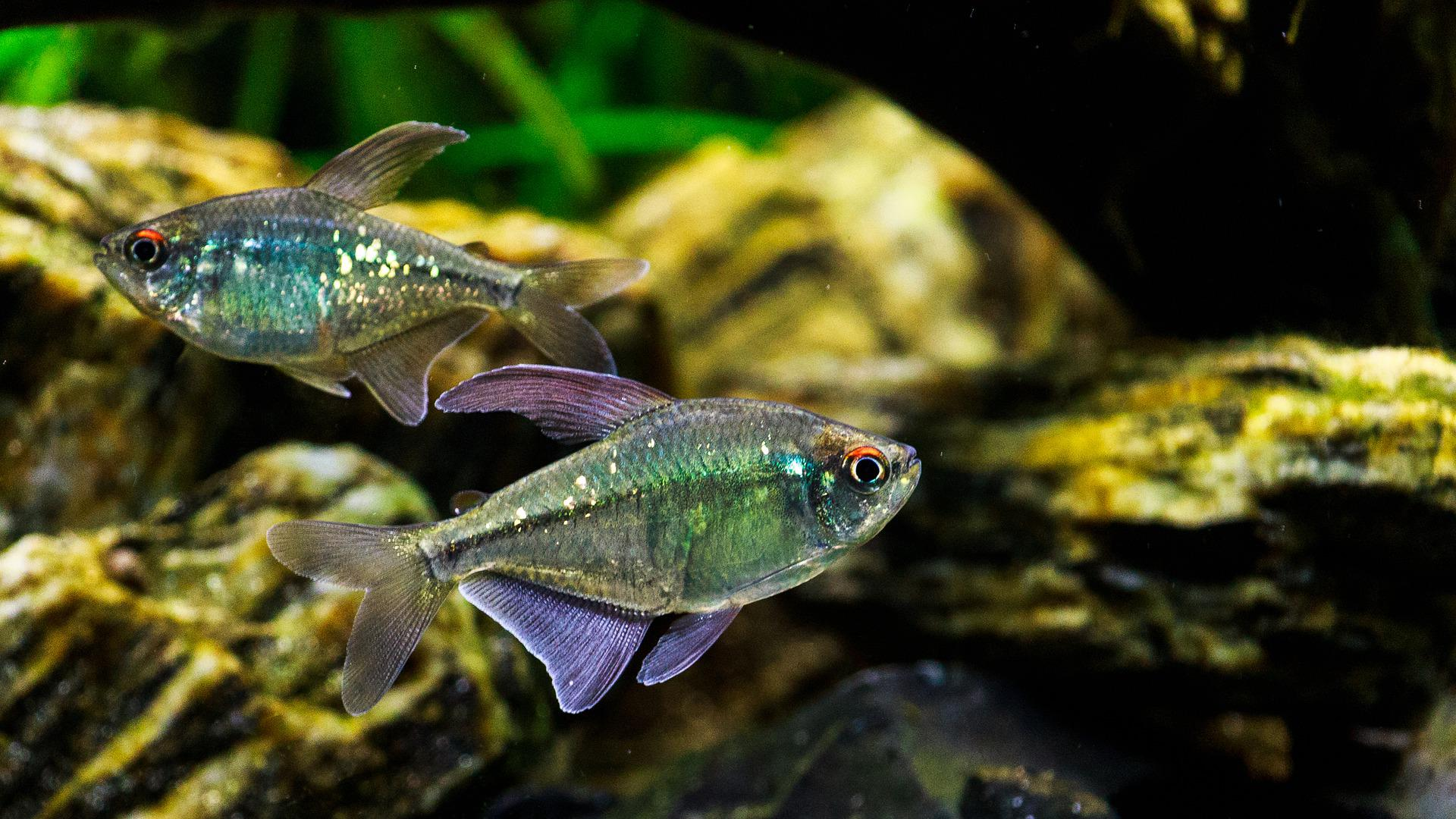 Dim lighting is necessary to create this type of environment. Too much light would simply defeat the whole blackwater effect and inspire algae or bacterial growth. If plants are to be grown make sure the lighting is around 6500 to 7200 K color temperature to inspire growth.

Just like any other aquascape or planted tank, some type of filtration is a must, even more so in this type of set up. Some people seem to think that Blackwater aquariums can be treated in the same way as with the Walstad method. The Walstad method implores the use of plants as one of the primary means of filtration. The Blackwater aquarium allows a very limited number of plants due to the light factor. Not only will there be detritus to deal with. There will also be a lot of slowly decaying leaves and wood.

This is where it gets tricky. Using activated carbon or any other chemical filtration might absorb the tannins in the aquarium water which in other scenarios would be great but tannins are essential to creating not only the blackwater effect but for providing the fauna the correct water chemistry. There are no definite studies that indicate how acidity can affect biological filtration as well. Some seem to think that de- nitrifying bacteria start dying at PH below 6. One good thing about having acid water though is that ammonia reacts with acid and becomes ammonium which is less toxic to fauna. That is not to say that PH should be allowed to fall and not be checked. On the contrary, this type of set up will need constant monitoring of PH. The decomposing plant material and wood will constantly leach out tannins making the water more acidic. It may come to a point where it gets too acidic for bacteria and fish to thrive. The solution to this problem though is an age old, effective method used by every aquarist in the world-water change. Regular water change is a must.

For starters, keep the following water parameters: water between Ph of 7.0 to 6.5. This should be comfortable enough for the fish, plants and bacteria to thrive in. Anything below 6.5 warrants a water change. As to how much will depend on how much you would like your PH to rise. Using soft water to replace the old water would mean a Ph of 7.0 to 7.5. 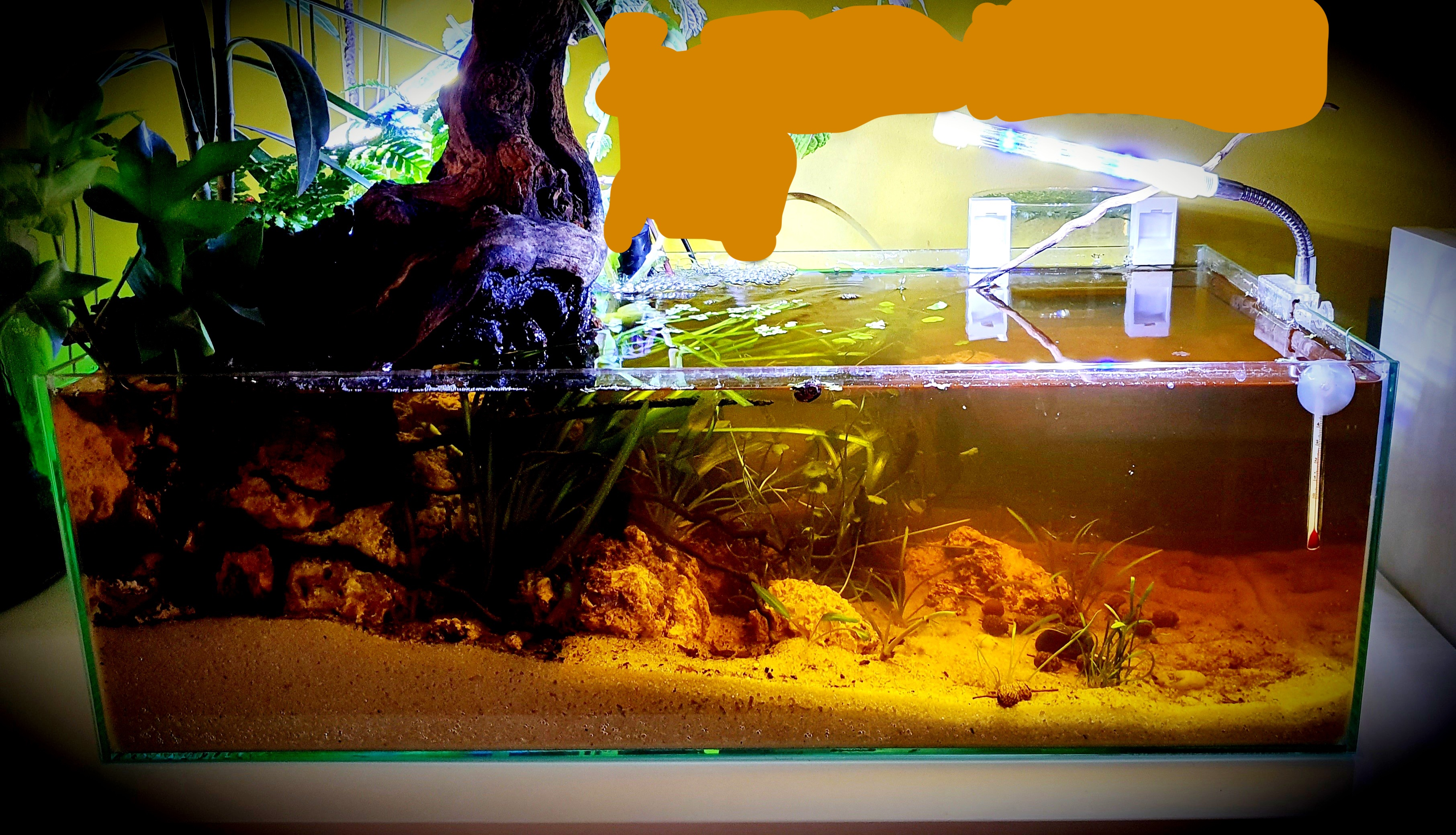 The Blackwater tank is indeed not for everybody in fact most Biotopes aren’t. While most newbies are after crystal clear waters and brightly lit tanks this type of set up offers the exact opposite. For most experienced aquarist though, this might be one to look into specially if one is to really provide the correct environment of plants and aquarium fish.