Jack Dempsey fish in the aquarium

In the aquascaping world, there is a discussion about whether the Jack Dempsey is an attractive fish from the hobbyist point of view or not. One claims that this is first-rate fish species that amazes people by its appearance, and others look at this freshwater fish with contempt. There is no accounting for taste. However, are those extreme opinions justified? One thing is sure: you can't stay indifferent while talking about the Jack Dempsey fish. 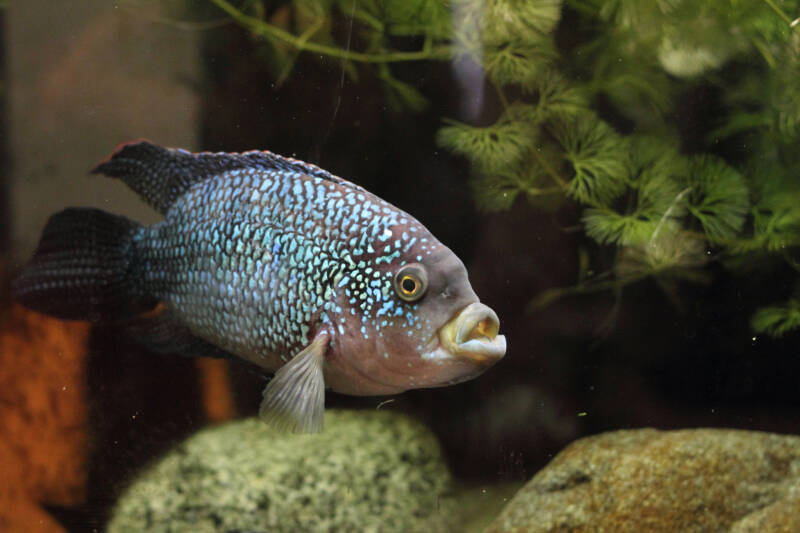 The natural habitat of the Jack Dempsey fish is slow-moving freshwater rivers in Mexico and other southern countries of North America, e.g. Belize or Guatemala. It has also been introduced to other areas with year-round warm climates. For instance, Jack Dempsey fish can be found in Australia or the United States, known as Mexican Blue Frontosa. They might escape from fish farms or be released by aquarists who don't want them. They have quickly settled in the new environment.
You probably wonder where its name came from. And it is quite a gripping story. It's not the name of its discoverer, but if you are a boxing fan, you've already deciphered it. To those unfamiliar with martial arts, Jack Dempsey was an American professional boxer who was the world heavyweight champion from 1919 to 1926. His name spread worldwide because of his aggressive fighting style and incredible punching power. It is not a coincidence that the Jack Dempsey fish is named after such a prominent person. However, we will demystify the comparison later. 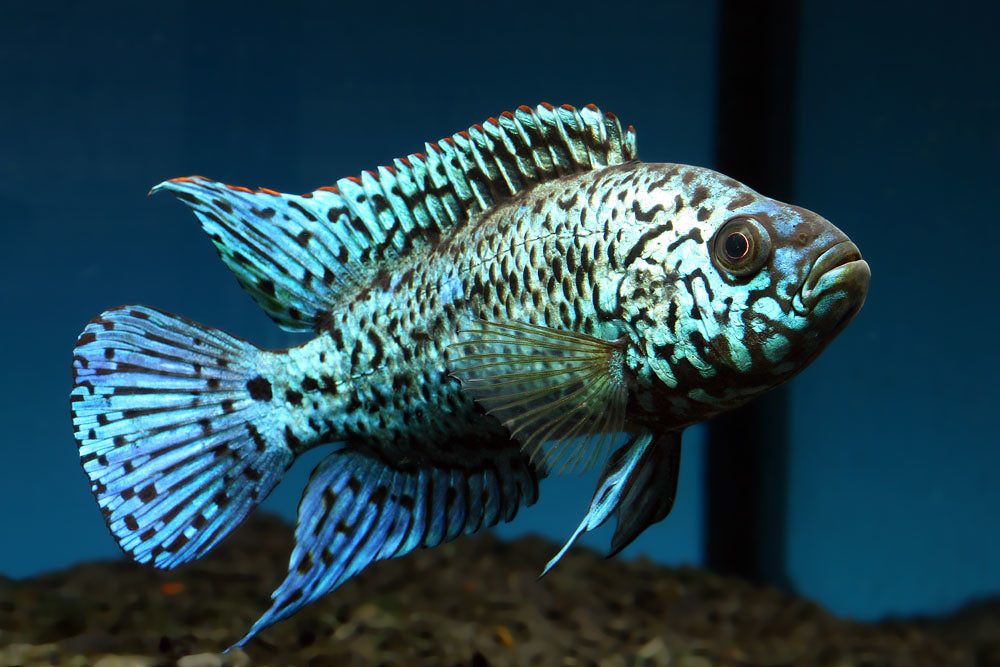 If you are looking for a docile fish for your tank, you will be disappointed with the Jack Dempsey fish. Besides, what would you expect from any animal named after a boxing legend? They are very aggressive fish and will eat anything that fits their mouth.
They are also territorial fish and will defend their turf like lions. Males tend to be more belligerent than female fish of this kind. It's essential to provide enough space for them to hide, e.g. some caves or crevices. The Jack Dempsey fish will establish its territory. 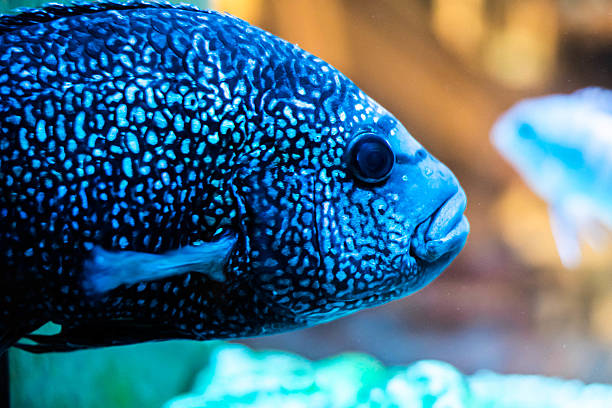 This fish's wild habitat has warm, slightly acidic water parameters, low light levels, sandy substrate, and plenty of vegetation.
It would be beneficial for fish to mimic those conditions in your fish tank. The minimum tank size for a single Jack Dempsey fish should be 60 gallons. Remember that having multiple Jack Dempseys controls their aggressive personality so we would say in terms of the tank size- the bigger, the better. A larger tank will offer more places for them.
In addition, you should add some caves or decorations to the tank so that the Jack Dempsey fish can hide. fine sand will suit their needs.
Last but not least, an important thing is plants, both rooted and floating plants. Hardy plants like Anubias will work fine because they can't be dug up so easily. Floating plants will imitate the natural low-light conditions.
Tank equipment
First, you must remember that the adult Jack Dempsey fish is not just a long fish. It is also very thick-bodied, so even a 6-inch Dempsey fish produces a more considerable amount of waste that enters the water than a slim-bodied 6-inch fish.
Therefore, a robust filtration system is required to keep the water quality at the highest level. Anyway, test your water quality with appropriate testing kits. You can use a drop checker to measure pH levels. Even though Jack Dempsey fish are pretty hardy, ammonia and nitrate spikes would harm them.
Secondly, try to avoid bright lighting in your fish tank. It can disturb Jack Dempsey fish's natural behaviour.
Finally, a heater is crucial to keep the water temperature between 72°F to 86°. A thermometer in the tank will help prevent temperature fluctuations. 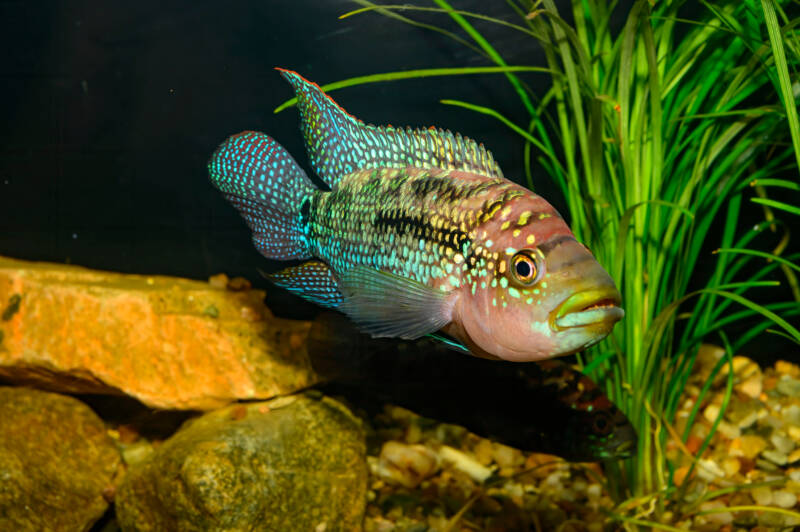 As we already know, the nature of this colourful fish is rather unfriendly. And that could be an understatement. It is wise to make reasonable choices among tank mates for the Jack Dempsey fish. Keeping Jack Dempseys as the only species in a fish tank is the safest option, especially if you are a beginner and do not know how to tone down their hostility. Try to have only one male Jack Dempsey in your aquarium. Otherwise, they will constantly fight with each other. Having a group of these species can reduce the risk of being too territorial.
Nevertheless, if you want to match them with other fish species, there are still options that most likely do well with our today's wicked guest. First, you should avoid peaceful fish such as tetras or freshwater snails and shrimps.
Tank mates that you might consider for the freshwater fish tank with Jack Dempsey fish should be similarly sized and able to defend themselves. These are examples of good tank mates that will do well with the Jack Dempsey fish: 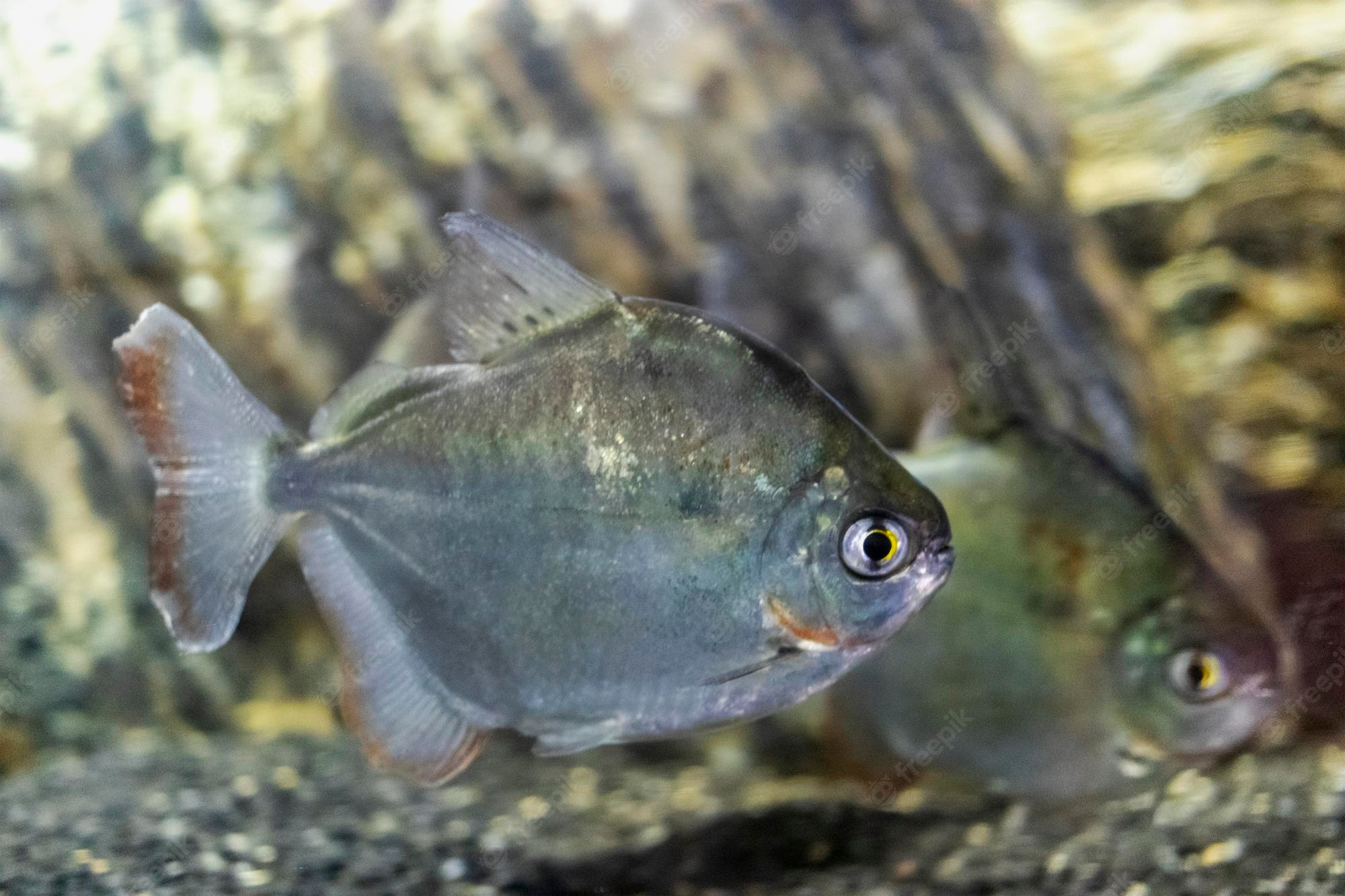 Jack Dempsey fish eat worms, small fish and crustaceans in their natural environment. In captivity, you should provide Jack Dempsey fish with a significant amount of protein from dried fish flakes and live or frozen foods. The perfect idea will be to feed them with pellets or flakes for cichlids. You may also supplement them with brine shrimp or grasshoppers. Avoid feeding your Jack Dempsey cichlid with plant-based food. It does not meet their nutritional needs.
Reminder: remove the leftover food to keep your fish tank clean and prevent overfeeding. Your fish should always finish the food in the aquarium before adding more.

Breeding Jack Dempsey fish isn't that difficult. It is most likely to happen when you raise a group of four or five specimens. The colour of Jack Dempseys is a reliable indicator if they are ready to mate. Female and male Jack Dempsey fish will strongly darken in colour.
After that, just wait for one breeding pair to isolate from the tank mates. We recommend you put them in a breeding tank, or they will destroy other fish without hesitation. It sometimes happens that the female fish is not ready to breed yet, and the male may harass them. In such a case, you should put the female fish in another aquarium or use the divider in the breeding tank. If you think she is ready to spawn, introduce her again to her partner or remove the divider.
The mated pair will spawn inside a cave on a flat surface. Female Jack Dempsey fish will lay up to 500 eggs. The eggs hatch after three days. Remove the parents from the breeding tank to avoid eating the fry. Use brine shrimp or commercial fry food to feed the fry until they are mature enough to eat food for adult Jack Dempsey fish.

Have you already decided if the Jack Dempsey fish is a reasonable choice for you? As previously mentioned, some people love the Jack Dempsey fish because of their extraordinary appearance and ferocious personality. Nevertheless, some hate this colourful fish because it can destroy their mellow community tank.
You make the decision. You may choose another south American cichlid or one of the countless other fish species if you do not want to deal with such an aggressive fish. If it does not repel you and you are interested in this specimen, nothing is an obstacle unless you do not take into account advice from this article. 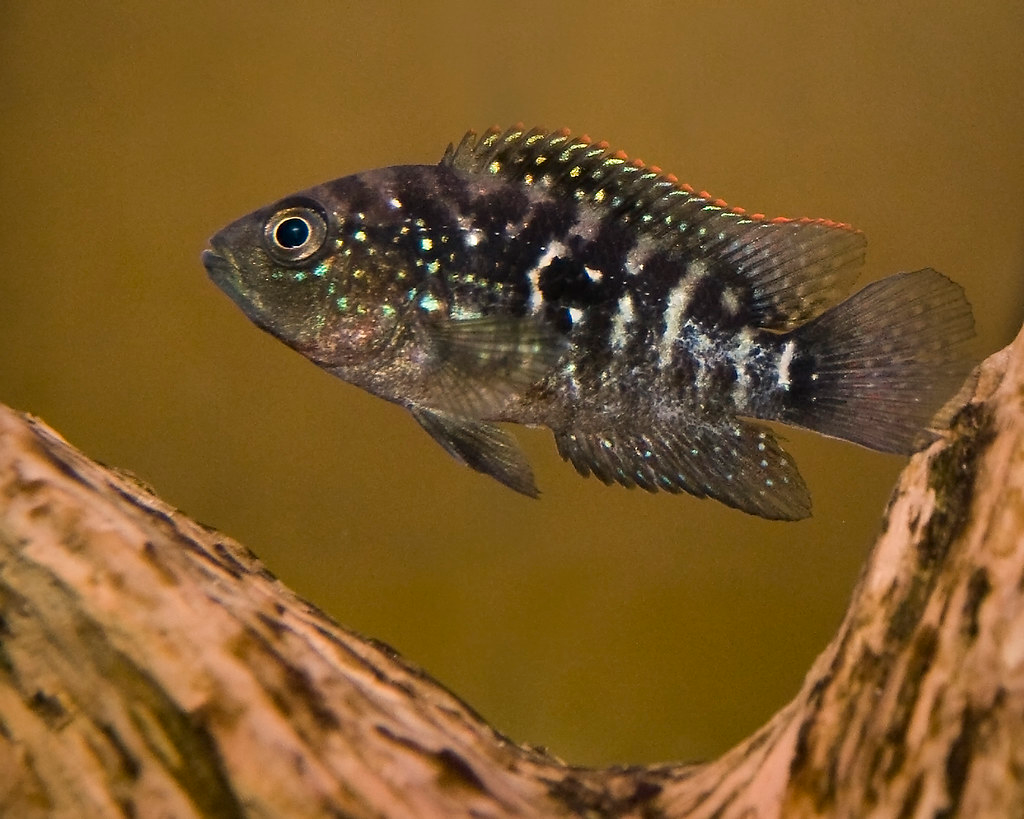