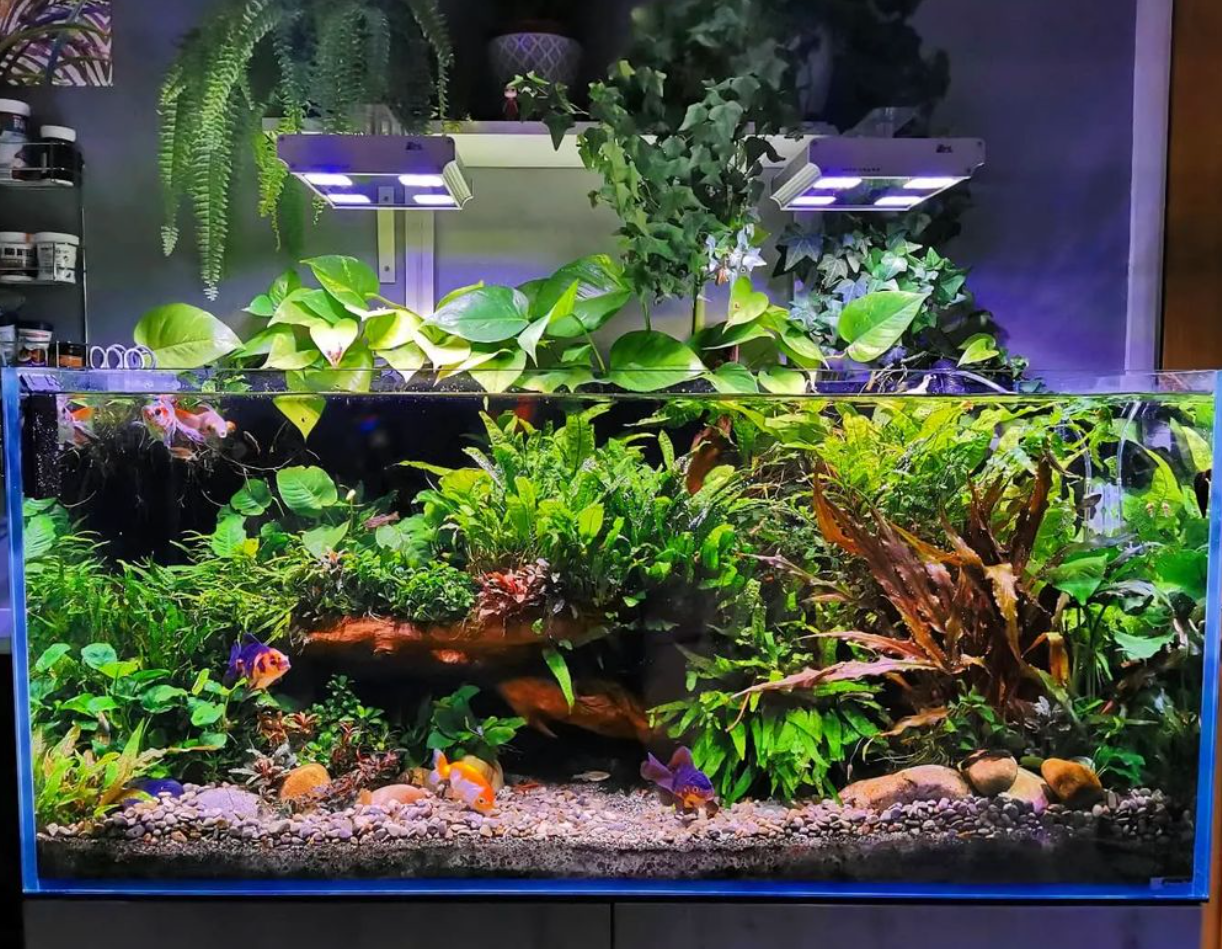 The 10 best aquarium plants for goldfish (that will survive)

When it comes to aquarium plants, Goldfish are not the first species you associate them with. Renowned for being messy, boisterous and hungry fish, Goldfish tend to be kept alongside fake aquarium plants or in a bare bottom tank. You would be forgiven for thinking goldfish cannot be kept in anything else. Well, we aim to show you that this is simply not the case. In this article, you will discover the best plants for goldfish aquariums. Plants that are easy to care for, look good but most of all, capable of withstanding everything that a goldfish tank can through at them.

What is so challenging about a planted goldfish tank?

First of all, to understand the challenge of growing live plants in a goldfish tank, you need to learn a little about goldfish themselves. Goldfish (Carassius auratus) have been domesticated for around 3000 years and have been selectively bred, providing us with multiple varieties which is why they have become so popular. As part of the carp family, they can grow quite big and being social fish, the need for a large aquarium is a priority for anyone looking to correctly set up a goldfish aquarium.

Like all larger fish species, Goldfish create a lot of mess and as such, good filtration must be included in any goldfish keepers aquarium setup. Without adequate filtration, goldfish waste will build up and cause issues with the water quality.

During feeding time, Goldfish will take food from all levels of the aquarium. It is during feeding time that the aquarium and its decor receives the most damage. Goldfish will rummage the substrate, move decorative wood or stones and even gulping down anything that remains on the surface. When you couple their hunger with their size, large amounts of fish waste and also the fact they should be kept in groups, it is quite clear to see why goldfish keepers find it difficult to maintain an attractive, planted, goldfish proof tank.

What have Goldfish keepers been doing all these years?

As mentioned earlier, Goldfish have been around for a very long time and through the years most goldfish keepers are focussed more on providing the best care for their beloved fish than making the aquarium itself look nice. Many plants and alternatives have been used through the years, some have worked, some not so much. Goldfish keepers have tried to find the best aquatic plant, capable of withstanding life in a goldfish aquarium. Below is some examples of what has not worked. How many have you tried?

A stem plant are a group of plants with similar features and as the name suggests, they are mainly stem based. The root systems on such plants are delicate and not robust in the slightest. These plants pull most of their nutrients directly from the water column via their many leaves meaning their roots are very small. Although Goldfish will not usually eat these plants, they can easily uproot plants with a root system as delicate as these do. If planted in a Goldfish tank, they will be damaged on a daily basis, resulting in broken and decaying plant matter all over the aquarium.

It might be the obvious choice for anyone who wants the aesthetic benefits of a planted goldfish tank but using fake plants does have drawbacks. We mentioned above that Goldfish love to uproot plants and this still applies to fake plants. These plants, wether plastic or silk plants, they still need to be placed into the substrate to remain in position. While feeding, Goldfish will rummage everywhere in search of their meal, resulting in the substrate being moved, including any fake plants.

Yes, the name does sound a little funny but in fact, this style of aquarium is used by a wide variety of different aquarium keepers. There are huge benefits to having no substrate in your aquarium. The main benefit being the simplified cleaning procedure. Without substrate, fish waste tends to gather together in the area with least flow, making it easier to remove. This method is often combined with our next method.

It might be no surprise to keep plants in pots however, in an aquarium it is actually not usually the done thing. However, if you are a Goldfish keeper and wish to benefit from real plants, you may be interested to know, this has been a method used by fishkeepers for many years. It is more common among fish keepers with bare bottoms (now now). By adding the right plants to pots in the aquarium, it is less likely your goldfish will damage them. The only downside to this is that it doesn't look very natural.

A terrestrial plant is what we commonly know as a house plant. They are basically plants that grow above the surface of water, away from the edge of water. Generally terrestrial plants cannot survive underwater with only a few exceptions. One of the most common plant that has been used by goldfish keepers are Pothos plants.

A Pothos plant is a vine plant known for its art purifying ability that is often used in the aquarium hobby to greatly improve the aquarium water and appearance. This large plant can be positioned in such a way that the roots are in the aquarium but the leaves grow beyond the surface of the aquarium water. The pothos plant are heavy root feeders and with their extensive root system, can create a very appealing feature to an open top aquarium.

Moss balls are known for their ability to absorb nitrates in the aquarium. This is hugely beneficial in a goldfish tank due to their excessive production of fish waste. They also absorb other harmful substances in the fish tank and even provide a home for beneficial bacteria. Oh and we think they look pretty cute too. Recently, it has become popular to keep small groups of moss balls in bowls of water on their own. Kids love them, goldfish don't eat them either.

But what if you want to create a setup with aquatic plants using plant species that looks good?

Now you have an understanding of what the goldfish aquarium keeper has worked with over the years, you may ask 'what's new?' well the truth is, nothing much is new so to speak. Instead, a different way of thinking is required to create a fully planted goldfish aquarium. By carefully selecting the best aquatic plants for goldfish tanks, it is absolutely possible. Let us explain.

It might sound obvious but by carefully choosing plants that have the correct root systems, it allows you to position your plants in a way that prevents them from being uprooted and destroyed, effectively making them goldfish proof. Even fancy goldfish, despite their cute appearance, can be guilty of a rampage. No plant is goldfish proof without our help.

But what about the layout?

Deciding the layout of aquarium plants is personally my favourite element to any aquascape. Creativity runs wild and it is pretty exciting right? However, in goldfish tanks things are always a little different and this stage of the setup is no different. Here it really helps to research a little more about the plants you decide to use. Aquarium plants don't all grow in the same way.

A good starting point it to learn the way your plants will grow. Some species do grow horizontally and vertically while others tend to grow straight up. This knowledge can help future proof your layout providing you with a great looking and practical goldfish tanks for as long as you wish to enjoy your creation.

Let me explain further. Most of the plants listed above are regraded as a slow growing plant but with their individual growth characteristics, some do better in different areas of your aquarium.

Low light tropical plants such as Java fern, Cryptocoryne and Anubias plants are better placed around the middle due to their overall height capacity and bushy appearances. The Onion plant grows very tall and has long narrow leaves which float beautifully around in the water current. This is a hardy plant that works very well when used as a background plant. It also does well in medium to low light environments.

Most successful planted goldfish tanks are designed in a layout that offers aquatic plants around the edge and back of the aquarium. This gives a fantastic backdrop and still gives the goldfish lots of space for swimming and feeding time. Additionally, maintaining an open spaced front and central makes tank maintenance much more accessible.

So, if you have always wanted to combine aquascaping and goldfish in the one aquarium, we hope the above information will be helpful and encourage you to try it. We do have to stress however, that even with the best of research and attention, there are no 100% fish proof aquarium plants and an aquarium plant may be off the menu for one group of goldfish but the same plants in another goldfish tank may not have the same success. Always monitor your fish and if they take a liking to one of your plants, you can do something about it quickly and try alternatives.