You must have seen some nature programs about the underwater life. If so, you were probably amazed by the view of hundreds of fish that swim in tight cluster and gleam, reflecting the sunlight. This unforgettable scene appears if there are schooling fish. The term 'schooling' has nothing in common with learning. Schooling fish species have this unique ability to form such groups in their blood. In the natural habitat, there are many ways for fish to thrive and save lives from the predators. Some fish species hide in the narrow places. Some are on the top of the food chain and they do not worry about anything because they call the shots.

And our today's guest have its own strategy to survive. First of all, fish school to stay safe, eat and swim without tiring out. In fact, there is no need for them to do it in a fish tank. They do not have to look for food or scape hunters. Hopefully, you have matched the livestock responsibly and aggressive fish do not meet peaceful fish. But you can not change the natural instincts. Once you introduce schooling fish to your fish tank, they will behave just like in their native environment.

To be honest, there is nothing wrong with that. Nobody would like to stop this behaviour, because it looks outstanding. Nevertheless, there are a few facts that you have to take into account to keep schooling fish healthy and stress-free in your freshwater aquarium. 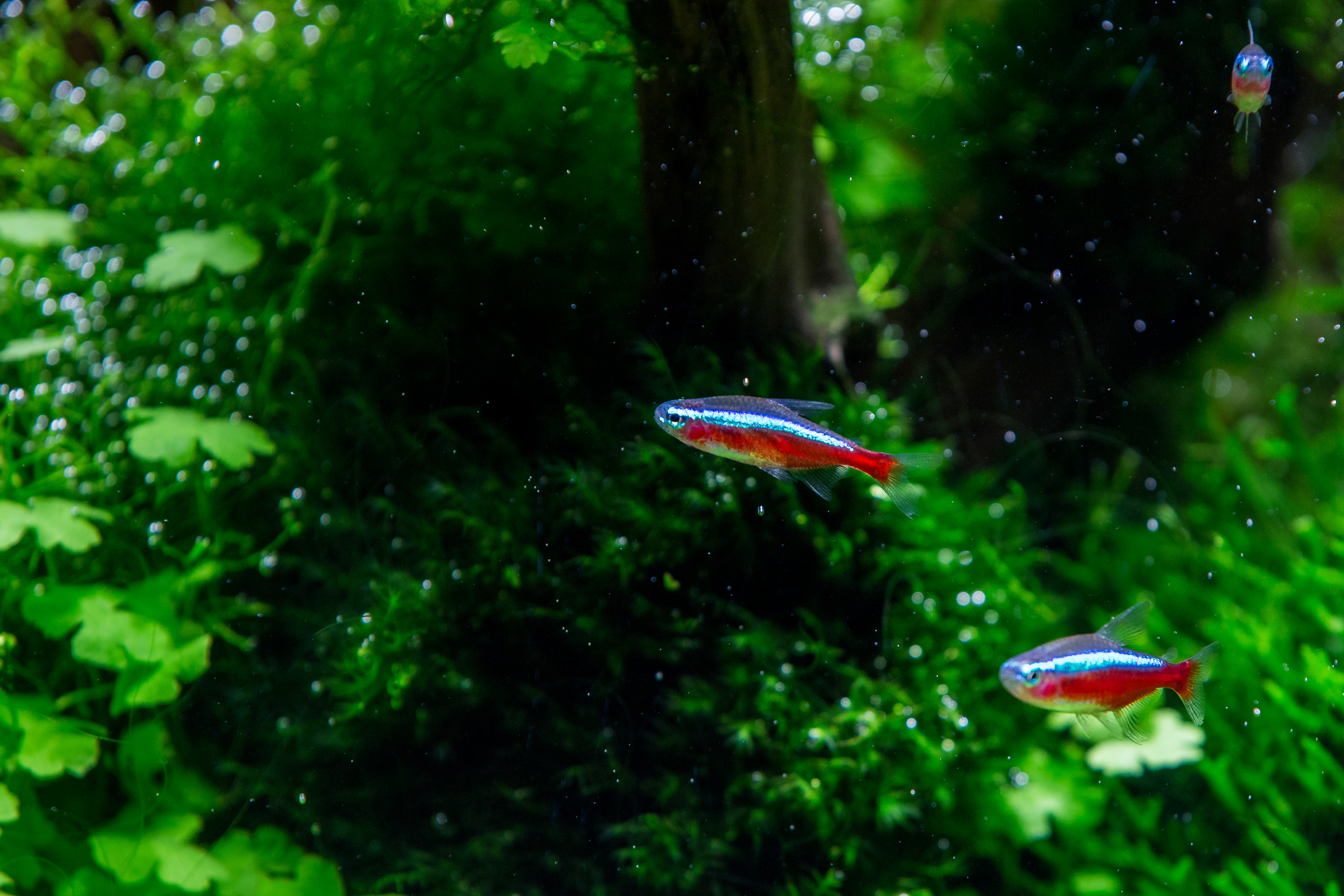 First of all, we should elucidate those words. These terms have different meaning but many people use it alternately. We will not delve into specific details, but for the purposes of this article, these explanations will be comprehensive:

Schooling fish create groups fish of their kind that swim tightly together in the same direction.

Shoaling fish rather do not form tight groups. They prefer very loose ones. However they still need other fish of their kind to feel comfortable. These fish swim and forage individually but keep being close to their group. They are more independent than schooling fish.

There is an oddity effect, that there will be other fish visible close to the real school or shoal of fish but as they stand out in appearance, they will be most likely targeted by predators. However, who would not like to join such a team? Worth trying.

Why do fish school?

In a school of fish, there is no one permanent leader that gives orders to the rest of a group. That would be difficult because in the natural habitat, this formation can count up to thousands of individuals. The leadership is taken by the fish that after twists and turns are at the front of the group. Schooling fish make every single turn and dip that their neighbor does and this movement happens instantly. This is the exact reason why this is such an efficient strategy. 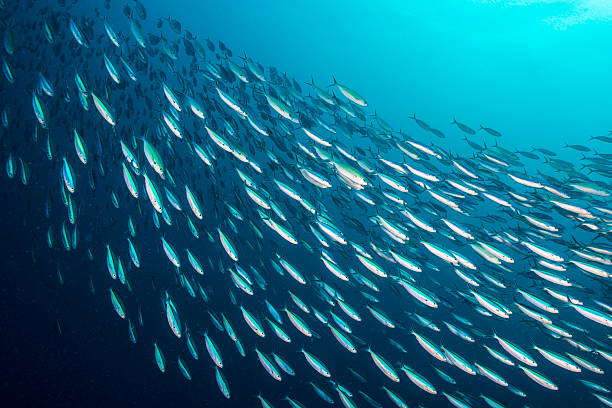 In most cases, schooling fish are rather tiny fish and they have impressive reproduction capabilities. To be honest, it can not be hard to find a mate in such a huge group. Moreover, they gain weight rapidly and become mature fast enough to become a valuable member of a particular school. While being in such a formation and following along other fish, water resistance reduces to the minimum. As a result, schooling fish do not feel fatigue so easily. Additionally, frightened fish change their position regularly what makes the attackers disoriented.

There are many schooling aquarium fish which will be an extraordinary addition to your aquarium. No matter if you consider purchasing schooling or shoaling fish, or both, the lower limit of these freshwater fish in your aquarium should be six. It's better to have more of them, because of their sociable nature. Of course, you do not want to add too many fish and make your fish tank overstocked. Make choices responsibly.

Nevertheless, bear in mind that if you put an individual to the tank, it will probably not spread its wings or even unveil the darker nature, becoming aggressive or depressed.

There are many fish species that will be perfect for smaller tanks, but the larger you want the school the bigger the tank should be to get the appealing effect. It is more difficult to get school effect in a smaller fish tank. Fish simply do not have enough swimming space

Here are some examples of best schooling fish species and shoaling ones:

Let's start with the most popular schooling fish of all time. Neon tetras can create a large school that will be colorful and captivating. Neons have only one inch in length. You should be careful about stocking them with bigger fish or what's worse aggressive fish species. Schooling fish have a great strategy to avoid hunters but it does not work well in such a small capacity. Bear in mind that carnivorous fish species also have something up in their sleeve. We don't want any of our neon tetras to end up as snack or be stressed and cause because of that some diseases. Good tank mates are peaceful community fish like e.g.:

Their name comes not only because of their appearance- striking black stripes, but also because of their spunky personality. They are semi-aggressive fish that have a reputation as fin nippers. Avoid housing them with fish that have flowing fins e.g. Angelfishes. If you keep them in a shoal of six or more, that should reduce the risk of their aggressive behaviour. Nevertheless, match them with other semi-aggressive species. 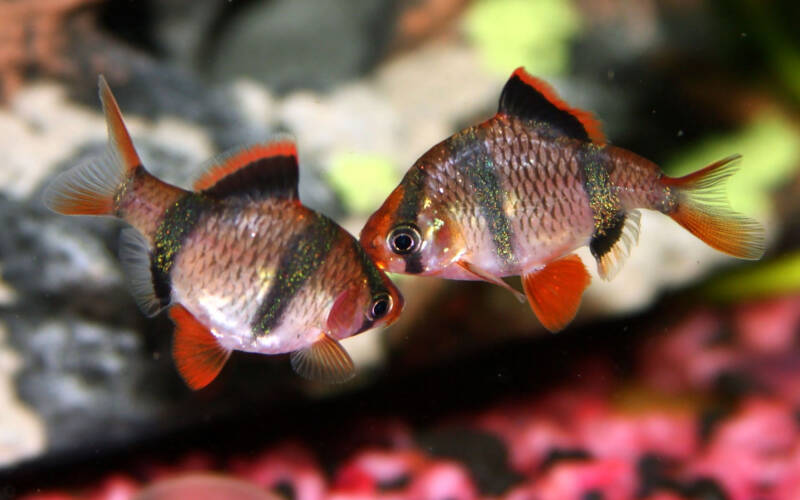 Harlequin rasboras are peaceful schooling fish that grow up to 2 inches. Small size+ calm temperament+ ease of care make them perfect fish for beginners. These hardy fish do best in schools of 6-8 fish. 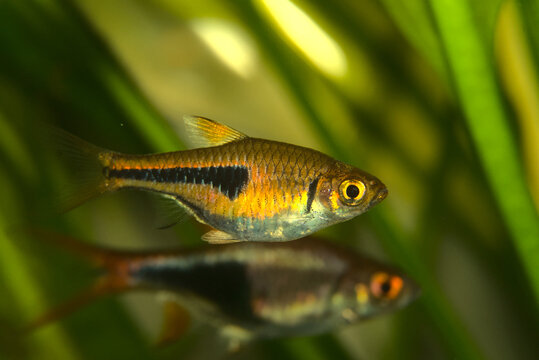 These schooling fish are not as popular as tetras or barbs are but are generally more affordable. White cloud mountain minnow are very active fish. As top to mid dwellers they have tendency to jump out of the tank so make sure your aquarium is equipped with a tight cover.

Zebra danios are the excellent choice for freshwater aquariums in almost every case. They are incredibly hardy and what's interesting they mate for life. This nano fish grow up to 2 inches in length and thrive in a community tank. Obviously, here also works the rule that big fish can eat small fish so look for other similarly sized fish. 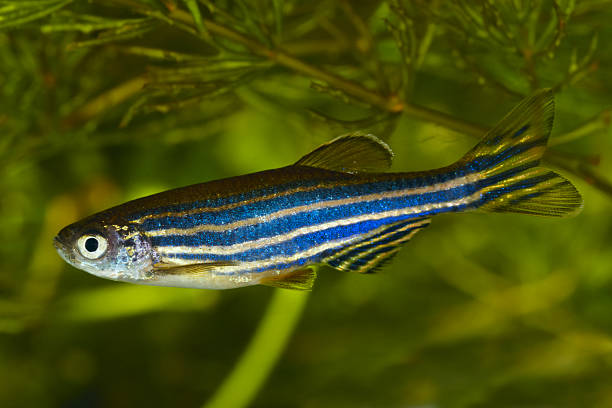 Another example of shoaling fish. You won't be able to see them hanging out in tight groups but they require companionship to avoid stressful life. Cherry barbs are called that way because their entire body coloration is cherry-like so no hidden information here. If kept in a planted tank with a dark substrate, they show a vibrant cherry color. They do not grow very large (1-2 inches) and in a large school are willing to explore the habitat. Cherry barbs feel best with their own kind but it is wise to have one male to every two females to evade aggression within the shoal. 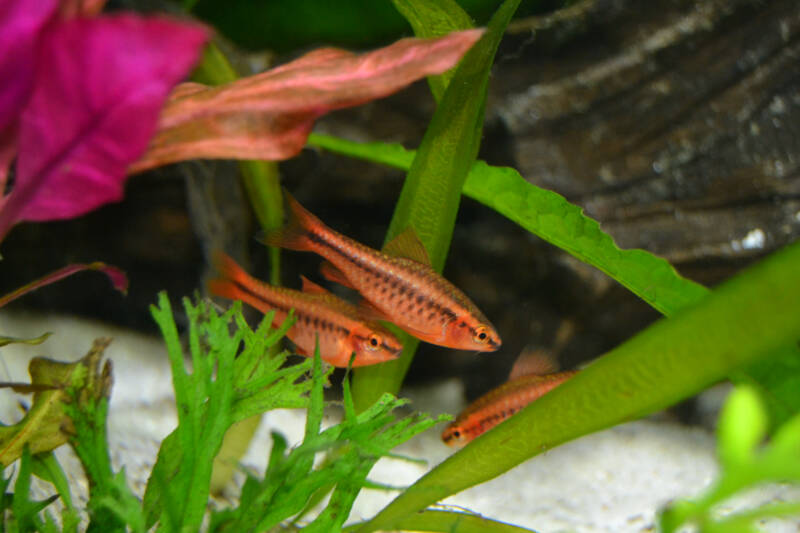 Bala sharks are pretty unfortunate fish. People buy them as small fish with bright scale and contrasting dark edges to their fins. The appearance does not change over time but they grow really massively, up to 14 inches! If you have such a huge aquarium, it could be awesome to have one of the so-called freshwater sharks. They do rather well with other peaceful community fish if you provide them enough swimming space and other fish of its kind. However, we do not recommend purchasing them if you start your aquarium hobby. 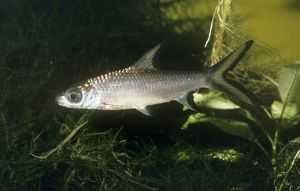 Schooling fish species are nothing more than (usually) brightly colored fish species that are shy in isolation. If you surround them by the same species, their true inner self will come out.

And above all, schooling fish add liveliness and something extraordinarily natural to any freshwater aquarium. Watching them mysteriously interacting in a school make us think that the nature have many matters that are not discovered yet. How many years of evolution did it take to synchronize like that? Even the most harmonized human structures are nothing in comparison to this kind of a teamwork. 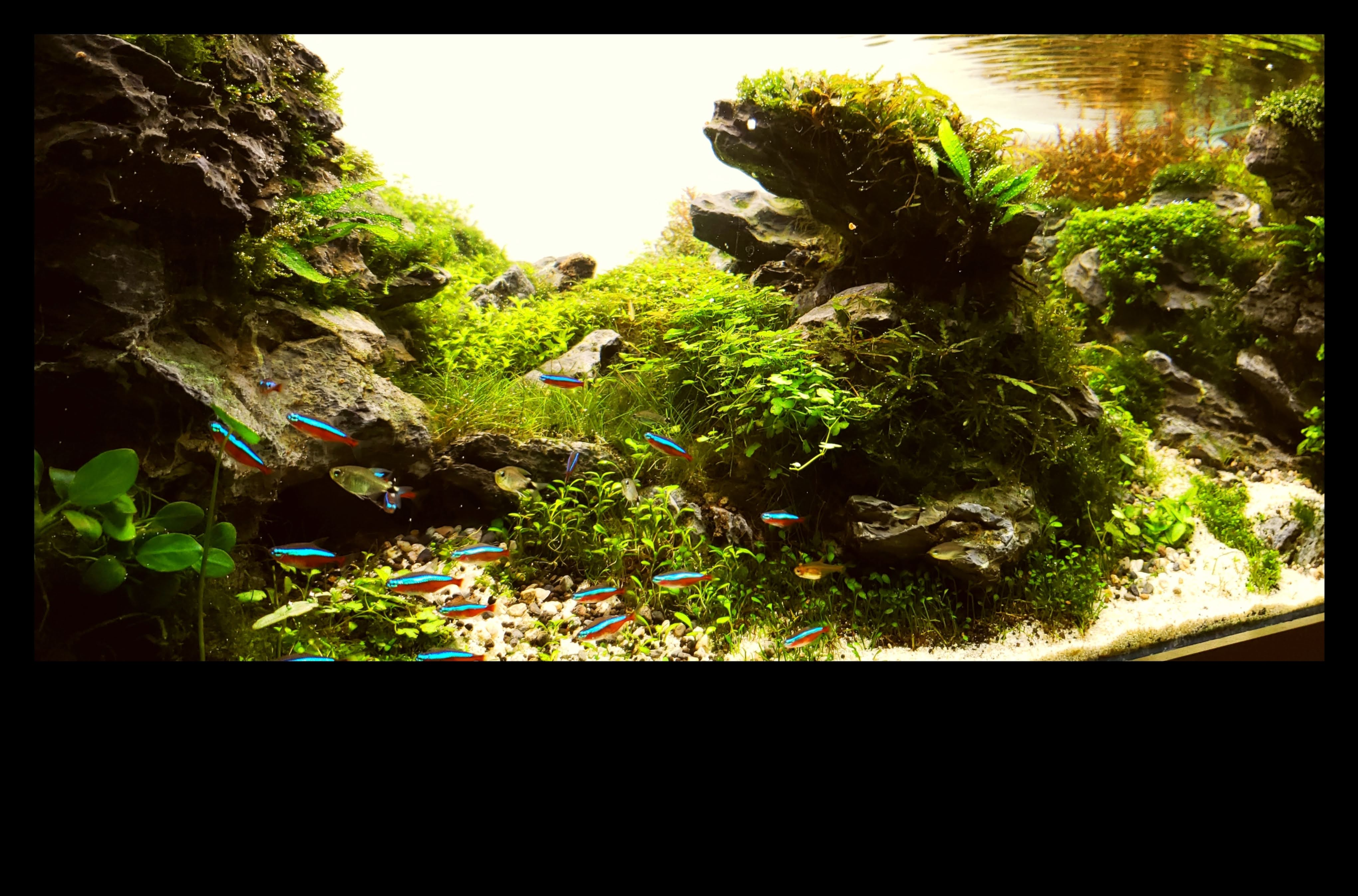